11. 12. 2010
Khyi-Mi Bunti Lamleh has shined in the show-ring again. On the National Dog Show Legionowo (PL) she got under Mrs. Magdalena Swieton (PL) a great judgement and she won Very perspective 1, Best Puppy. Congratulations to her owner Jolanta Cichecka and we send a kiss to Bunti.

The shows were near to the christmas-market and this has woken the holiday mood. It stayed with us in the evenings too, we spent them visiting Radana. Thank you for your hospitality! Look also at another pictures from Annaberg. If you like the bows of Bhoominka and Maxik, you can find them and many others in our E-shop.

At this weekend were also shown Khyi-Mi Barri Burri Lamleh under Mr. Stefan Popov (BG). She got perfect judgement with VP1, Best Puppy! Congratulations to her family!

26. 11. 2010 Great news from England! Our Bhoominka has great Primary Lens Luxation DNA result (PLL-CLEAR), so she and her puppies will be never taken ill with this inerhited disease!

6. 11. 2010 We joined The First Haná Trip with Tibetan Terriers organized by our friend Simona Jemelkova. The weather was lovely, people, dogs, food and mood were perfect! We had there a little family-meeting with Bhoomi's mother Sannynka and with "our" puppies Ardin, Avatar, Bod-ja, Bhagya and Babs-chu. Thank you for the great trip and we are looking forward to joining the second year! You can see lots of pictures in our external Picasa album.

30. 10. 2010
Barri (Khyi-Mi Barri Burri Lamleh) was on another show and in Moscow won VP1, BOB Puppy under Mr. A. Belkin (R). It shined Brughi (Khyi-Mi Brug Lamleh),too, under Mr. Frank T. Sabella (USA) he won VP1, BOB Puppy, res. BIG Puppy in Mendosa. Congratulations to the owners Marina and Gustavo and kisses to Barri and Brughi. 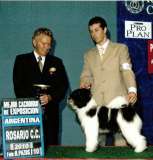 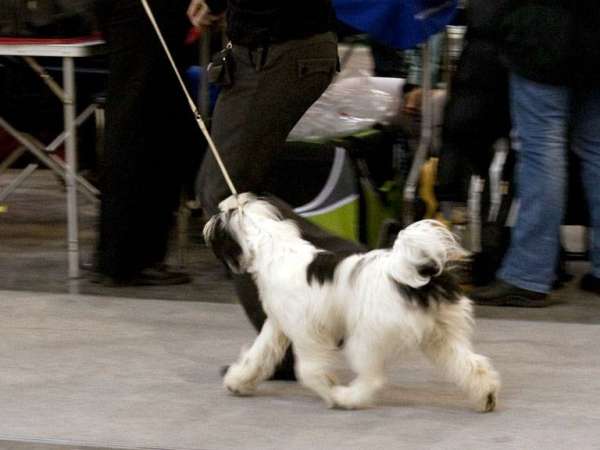 2.- 3. 10. 2010 We were to European Dog Show and to Tibet Dog Europe in Celje / Slovenia. We met there many friends, lots of internet-friends and we enjoyed a beautiful weekend wit our dogs. Bod-ja has made us huge pleasure, he was shown and he won on both shows!!! On TDE the puppies were judged by Mr. Paul H. Stanton (S) - VP1, res. BIS puppy, on EDS the puppies were judged by Mrs. Cindy Pettersson (S) - VP1, Best Puppy of Breed - and with this Bod-ja became European best TT Puppy! Bhoominka and Ardinka were shown only on Tibet Dog Europe. The adult TT's were judged by Mrs. Kerstin Handrich (D). I usual don't comment on the judging and I don't do it nor now, I throw in only that I hope not to meet the Mrs. judge in the ring anymore. Bhoomi VG4, Ardinka Exc.2, res. CAC. Look the pictures from z TDE and EDS.

19. 9. 2010 We was on Specialty Club Show KTP in Ruzindol (SK). The weather and feeling were super and the results - perfect!
GCh. Ch. Khyi-Mi Ardin Lamleh - Excellent 1, CAC, CC - she won at thirth time her class at a club-show and she fulfiled the conditions for the title Club Champion! Congratulations to the owner Miska Kovacova Bolgacova and thank you for the great representation of our kennel.
Bhoomi - only 5 months after 8 puppies-birth - Excellent 1, CAC, CC, Best Of Breed and in final ring she were in the shortlist under 6 best in show dogs!
And our happy Khyi-Mi Bod-ja Lamleh enjoyed the athmosphere and the attention of the judge and he achieved the best result Very promissing 1,

Thank you to the judges Mrs. Gabriela Ridarcikova and Mrs. Linda Volarikova for the appreciating our dogs and to the organizers for a great show!

12. 9. 2010 We got a beautiful greeting from Buenos Aires from our puppy 5-month old Brug. He practise skivy for his first show and we will cross fingers for Brug and his team from the kennel WeKuyen!

As we get regularly new pictures from our puppyowners, all our puppies have under our homepage their own websites: Litter A, Litter B.

Only two years old Ardinka fulfilled the conditions for the title Grand Champion of Slovakia!!! Congratulations to the owner Miska Bolgacova and we wish her lots of success for the future, too!

First news about our B-litter on shows! Khyi-Mi Bod-ja Lamleh touched the show-ring for first time on 4. 7. 2010. He was lucky with a very sensitive and kind judge, Mr. Adam Ostrowski (PL). And the very first ranking of our Bod-ja: Very Promissing 1, Best Baby! Thank you!! Only a week after had a show-debut Khyi-Mi Bunti Lamleh. She went very courageous, too, and got the same ranking: Very Promissing 1, Best Baby! Congratulations to the owner of Bunti, kennel Hoksa-Rex.

7. 6. 2010 Our "B" puppies are leaving slowly for their new homes and according to the first news Bras Bu (aka Kimi), Bhagya, Bru-rigs (aka Kimmi), Bunti and Babs-chu acustomed theirself inmediately and without any problems. Brug and Barri Burri will leave soon and Bod-ja will stay at home in Slovakia to keep Bhoominka company.

30. 5. 2010
Bhoominka and puppies were in the photooto-studio of Roman Skyba. The profesional photographer did lots of beautiful pictures! Thank you and we can this mr. photographer recomend to you, he loves puppies :).
Some first pictures can you see in our gallery and there is a video from this photo-shooting made by our friend Julo Simlovic. 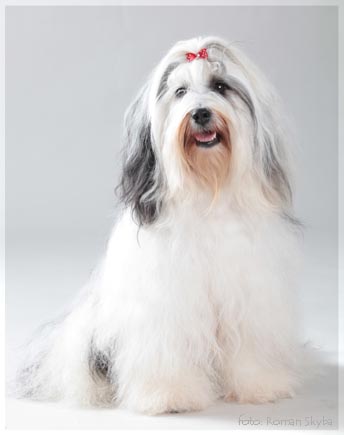 24. 5. 2010 Our Bhoominka (MultiCh. ICh. Bhoomi Lamleh Schambala) became
Nr. 1 Tibetan Terrier 2009
in Slovakia and Czech Republic!
She collected enough points to outrun all the Tibetan Terriers in the both countries! We are very proud of her! And it is not all! The second place after mother Bhoomi reached her two-years old daughter Ardinka (Ch. Khyi-Mi Ardin Lamleh). Congratulations and we send a kiss for Ardinka. We hope, the second pupppies of Bhoomi will go this the success-way of their parents and their elder siblings, too. They begun to know the world outside. The puppy-pictures in green can you see in our Picasa album.

6. 5. 2010 Anandi, Ardin, Aryan, Avatar and Anshu were born exactly two years ago! Happy Birthday, we wish you are so happy in your families forever! And to your second Birthday we give you the news, that you are all CCL-clear after your parents Diesel and Bhoomi.
Under Puppies we added some new pictures of our actual litter.

25. 4. 2010 Our three weeks old puppies make us great joy. They grow into beuty and they have already started to play and with this they make us orderly fun. Under Puppies there are two new puppy-videos.

11. 4. 2010
Ardinka and Tarko were shown on National Dog Show in Brno (CZ). Tarko (Khyi-Mi Avatar Lamleh) with exc.2 res. CAC and Ardinka (Ch. Khyi-Mi Ardin Lamleh) with exc.1, CAC. With this she fulfiled the conditions for the Czech Champion in age 23 months only!

Congratulations we are very pleased with the success of our puppies!

We has been with Bhoomi to the ultrasound. She has in the belly several secret Bubbles with beating hearts.

1. 2. 2010 After a long planning and after even longer way (1250 km) in the snow, rain and fog we managed for Bhoomi a meeting with very beautiful, lovely and successful Farouk in sunny Holland at Wanted Nice Dogs. Bhoomi was fascinated by him just as we were and she enjoyed his attentions with passion. Thea, Max, thank you very much for your hospitality and for that we could see all your beautiful TT-pack! 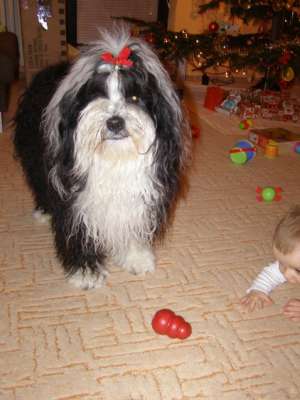 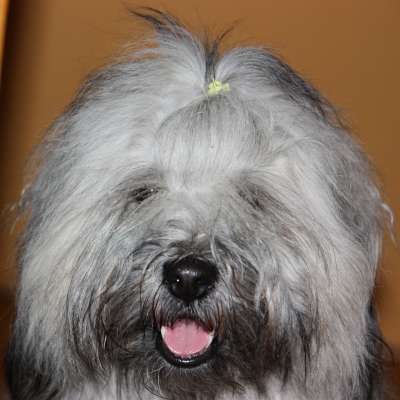 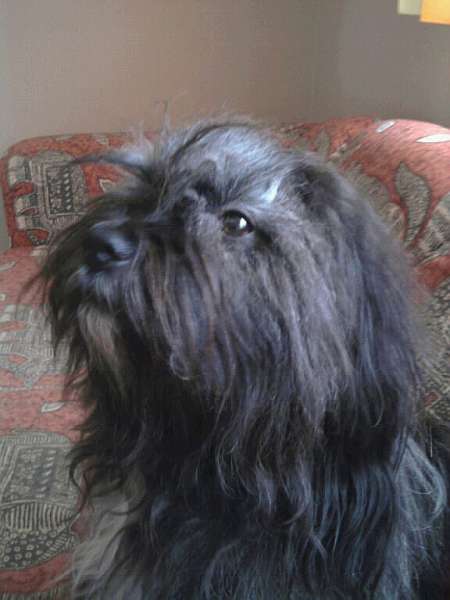 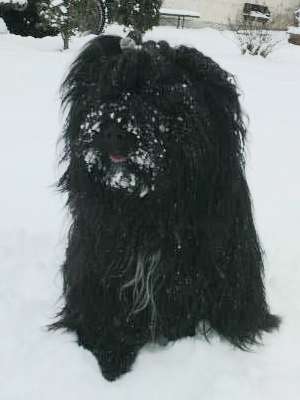 Many thanks to the owners of our dear A-puppies for lovely winter-greetings. Early in April we'll wait the birth of the "drow" of B-puppies and we hope to find such a gorgeous families like for the A's. Even when Bhoomi prepare herself for a maternity and she won't run in the show-ring this year, our name promotes fantastic Ardinka (Ch. Khyi-Mi Ardin Lamleh), who on her first show this year won the intermediate class with V1, CAC, CACIB and won the title Champion of Slovakia! She is the first Champion in our kennel and we are very very proud of her.