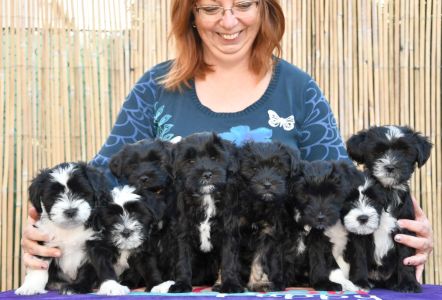 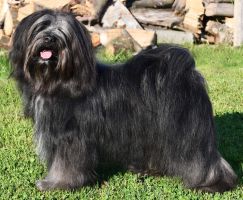 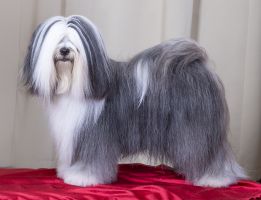 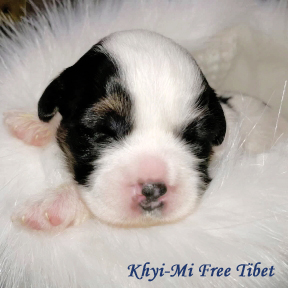 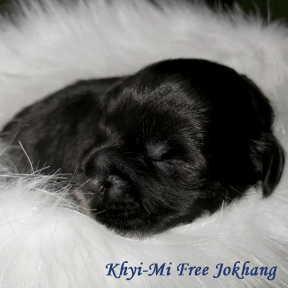 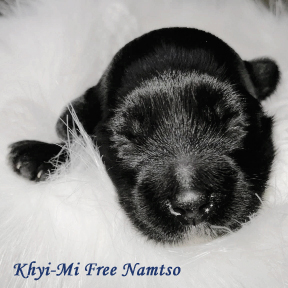 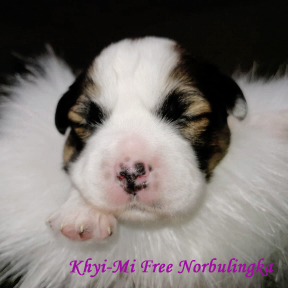 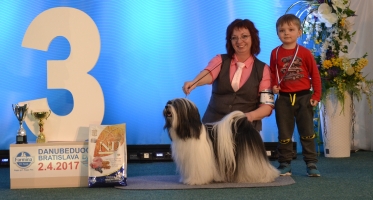 1/APR/2017 Happy 7th birthday Khyi-Mi "B" litter! Bodja celebrated his birthday at the show in Bratislava and he made me very happy and proud again. TT's were shown under Mr. Lozic Željko. Bodja won the breed with Exc.1, CAC, CACIB, Cruft's Qualification and BOB and he was awarded
BEST IN GROUP 3rd
by Mrs. Tatjana Urek. Thank you to the judges. At the final ring, I've had the best supporter ever - my son Miško who cheered loudly all the time :)*
Congratulations also to Khyi-Mi Emchi Lamleh Bhagya who won Very perspective 1 in the Puppy Class with his owner Zuzana Bruderova. 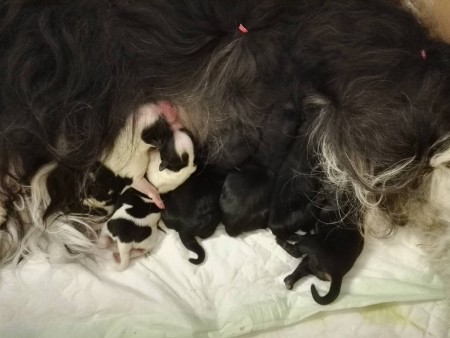 6/MAR/2016 Sometimes in my life, I start to misdoubt what I'm doing years ago. Then, I need an important signal or a kick to know what way to go. This time I was seriously thinking about an another breed, but I stil wasn't 100 % sure if this is what I really want to do. So, I decided to believe to one signal - the result of the show in Graz / A where I showed Bodja under well respected breed specialist Primož Peer / SI. It was a lot at hazard so I felt stagefever after very long time again.  But Bodja enjoyed the show after the long show-break and it was really a pleasure to show him. The result was the special signal for me - Excellent 1, CAC, CACIB, Best Male, Best Of Breed. Thank you to Mr. Peer I'll stay with Tibetan Terriers henceforth... ... and I start to plan the next litter seriously. 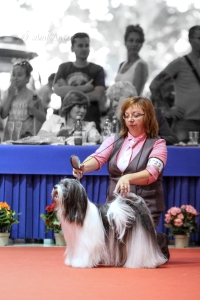 25/FEB/2016 Bodja did it again. For the fourth time in his almost 6 years long life he is the Winner TT of the year in Slovakia and in this year he is also the allover Tibetan breeds winner again.
Thank you to all the judges who have judged him - in 2015 - to 22 x Best of Breed, 4x Best in Group, 2x Best In Specialty Show and 1x Best In Show. 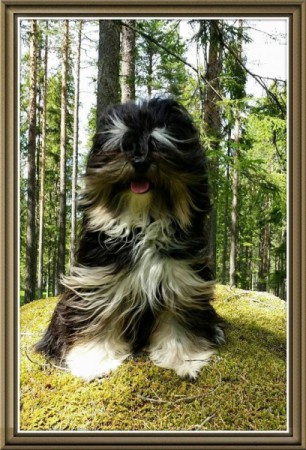 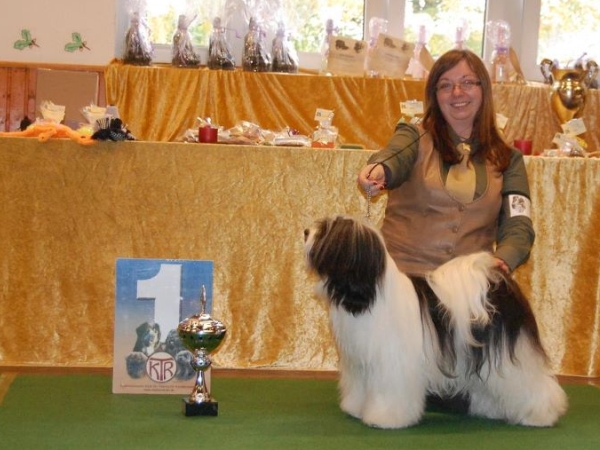 Bodja - the big victory at the Tibet Dog Europe 2011 in Werl (D). The dogs from 16 countries were judged by a breed-specialist, experienced TT breeder, Mrs. Sara Cross More (GB). Our 18 months old Bod-ja started in the Intermediate class and he won it with Excellent 1, VDH CAC. Afterwards he entered the competition for the prestige title SKAR and title KTR CAC with the Open and Champion class winners. After a hard battle with two American's Bod-ja won the title and in the end he became Best Male. We appreciate a lot the judgement of this renowned specialist, this is why we publish it: "Exc. young dog, super head + expr., lovely outline, corr. balance throughout, exc. bone + feet, really true TT type, exc. mover." 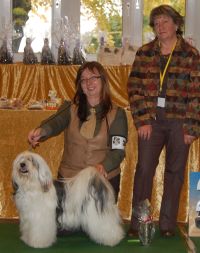 21. 2. 2011 We were on the East Cup Winner 2011 Show in Kosice (SK). TT's were judged there by well-known and skilled Mrs. Monique Van Brempt (BE). Our Bod-ja (Khyi-Mi Bod-ja Lamleh) showed himself very well and he run out of the ring happy with lovely Exc.1, CAJC, Junior East Winner 2011. After he took a nap, he walked outside and ate a little bit, strong and ready he run in the final ring. He did absolutely great in movement and in the stand too and he ranked the fantastic first place - Best In Show Junior! More pictures from this show you can find in our FB album. 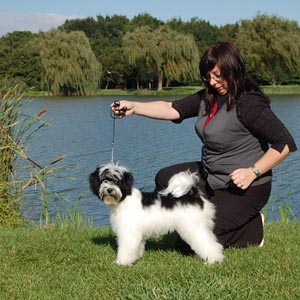 2.- 3. 10. 2010 We were to European Dog Show and to Tibet Dog Europe in Celje / Slovenia. We met there many friends, lots of internet-friends and we enjoyed a beautiful weekend wit our dogs. Bod-ja has made us huge pleasure, he was shown and he won on both shows!!! On TDE the puppies were judged by Mr. Paul H. Stanton (S) - VP1, res. BIS puppy, on EDS the puppies were judged by Mrs. Cindy Pettersson (S) - VP1, Best Puppy of Breed - and with this Bod-ja became European best TT Puppy!

19. 9. 2010 We was on Specialty Club Show KTP in Ruzindol (SK). The weather and feeling were super and the results - perfect!
GCh. Ch. Khyi-Mi Ardin Lamleh - Excellent 1, CAC, CC - she won at thirth time her class at a club-show and she fulfiled the conditions for the title Club Champion! Congratulations to the owner Miska Kovacova Bolgacova and thank you for the great representation of our kennel.
Bhoomi - only 5 months after 8 puppies-birth - Excellent 1, CAC, CC, Best Of Breed and in final ring she were in the shortlist under 6 best in show dogs!
And our happy Khyi-Mi Bod-ja Lamleh enjoyed the athmosphere and the attention of the judge and he achieved the best result Very promissing 1, BEST PUPPY IN SHOW ! Thank you to the judges Mrs. Gabriela Ridarcikova and Mrs. Linda Volarikova for the appreciating our dogs and to the organizers for a great show!

5. 9. 2010 CAC Mosonmagyarovár, H - Khyi-Mi Bod-ja Lamleh - Very perspective, Best Puppy In Show 3rd.
24. 5. 2010 Our Bhoominka (MultiCh. ICh. Bhoomi Lamleh Schambala) became Nr. 1 Tibetan Terrier 2009 in Slovakia and Czech Republic! She collected enough points to outrun all the Tibetan Terriers in the both countries! We are very proud of her! 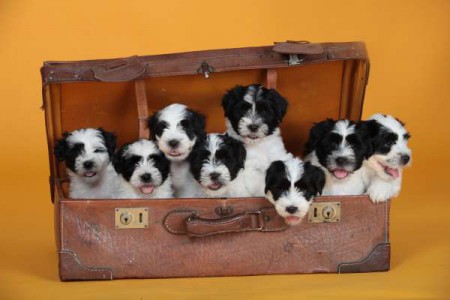 1.4.2010 Bhoomi gave us puppies. We have got 5 males and 3 females, all white with black markings. Follow them under Puppies - B-litter.

From this litter we kept a puppy boy - Bodja.

On these shows there were shown two puppies of Bhoomi - Ardinka (JCh. Khyi-Mi Ardin Lamleh) and Tarko (Khyi-Mi Avatar Lamleh). Both of them were succesfull and won the Intermediate class with 2x Exc.1, CAC. Congratulations, your succes make us very glad!

21.8.2009 Bhoomi fulfilled the conditions for the Interchampion!!! at the Middle-East European Winner show in Wels / Austria.

17. 5. 2009 Bhoomi was very successful on International Dog Show in Budapest! She won under Mrs. Vija Klucniece (LV) beautifuly klassification V1, CAC, CACIB and BOB! With the juniorhandler Angelika Bobrikova under Mr. David R. Miller (USA) they won 1. place in juniorhandling! And she ended her amazing day in Hungary with the win of the 9. Group FCI under Mrs. Chantal Méry (F)

We enjoyed a big show-pleasure and pride on 2. 11. 2008 in Nitra, where two of our puppies had their debut - Nuki (Khyi-Mi Anandi Lamleh) and Aryan (Khyi-Mi Aryan Lamleh). Both puppies did very well so as their owners and they got the best note Very promissing from the Puppy class. We was happy with Bhoomi too, she won under Mr. Robert Kanas the open class and then the CACIB-battle. With the classification Excellent 1, CAC, CACIB

Bhoomi fulfilled the conditions for the title Champion of Slovakia!

The day continued in the final-ring. In the competition of many very promissing puppies of the show, our Aryan was very succesfull and became the Res. Best Puppy In Show. Many congratulations to Aryan, Nuki and their families.

10. - 12. 10. 2008 We organized our first puppy-meeting from the litter Khyi-Mi "A" in Sulov. All puppies came, we all was really happy with the family-company. More pictures can you see under puppy-meeting.

25. 8. 2008 On weekend 16. - 17. 8. we was with friends Schambala, Sengge and Legs-Smon on dog-shows in Bratislava. Bhoomi evidently missed the showing and she showed herself beautifull on both show-days. On Saturday was the judge for Tibetan Terriers the President of Romanian Kennel Club, Mr. Christian Stefanescu (RO) and he judged Bhoomi as Excellent 1, CAC, res. CACIB. We was very glad on Sunday too, the Tibetan Terriers were judged by Mr. Miroslav Guniš (SK), who is judge for TT's more as 10 years and he placed Bhoomi in the open class also on first place with Excellent 1, CAC. We are very satisfied with the weekend. Many thanks to both judges.
The mother of Bhoomi, Sannynka (Mocowodos X-Model Xanthia), did well too, she won CACIB and fulfilled the conditions for Slowakian Grand-champion!!! Congratulations!

FIRST BEST OF BREED OF BHOOMI

3. 8. 2008 Bhoomi is back in the show-rings! The dog-show in Zakopane (PL) was great relax after months with care about our pupies and it was very nice return among exhibitors. Bhoominka enjoyed showing herself and won great Excellent 1, CWC, Best bitch of breed, BOB!

6. 5. 2008 After 61 days waiting our first puppies are born. We have 3 boys and 2 girls. The parents of this litter - as Bhoomi so Diesel are typical healthy breed-representatives and that confirm the passed-out health-tests and also the excellent results on dog shows. More informations and photos from our first litter can you find under Litter A.

19. 4. 2008 Bhoomi is already 5 weeks pregnant. She enjoys her little secret as good as the beautiful spring days. Our friend Laco took the 'longer glas' for a walk and made a lot of nice pictures:

25.11.2007 We have great news! Our Bhoomi had her eye-test and the results are perfect: her eyes are absolutely clear and she has also PRA, LL-OK!
On 17. - 18.th of November 2007 we were in Prague. Bhoomi took a walk with us in the historical centre. She was prepared for the show so she was wearing her jacket. And the reflex colour of her overall changed her to a police-dog for a while. Next day at the International Dog Show in Prag she showed herself very well and she won exc. 1, CAC and res. CACIB.

13. 5. 2007 Bhoomi won her class on International Dog Show Springdanube in Bratislava. Mr. Miroslav Guniš (SK) rated her on first place with exc. 1, CAJC and Bhoominka fulfilled with this the conditions for the title Slovak Juniorchampion. She makes us very happy!!!

At the show was even more successfull the mother of Bhoomi - Sanna, she won exc. 1, CAC, CACIB, BOB! Congratulations to Bara And Martin. After the show we used the area of Incheba for a few pictures and a game in the green.

6. 5. 2007
We showed Bhoomi in rainy day in Banska Bystrica.
The wather was could and wet and Bhoomi was running in the wet grass not on 100%. But she was pretty standing and Mr. Robert Kanas (SK) rated her on first place from three young females with exc. 1, CAJC.

26.4.2007 at 5:47 a.m., our beloved Bhoomi is one year old. She makes our days beautiful with her charme and vitality and with her obedience and fawn she obtains love of our friends. Bhoomi, happy Birthday and stay as you are! I wish you to be so happy with us like we are with you!

11. 2. 2007 Bhoomi met her brothers Ba-Lu and Bon-ri in Brno. So as a puppy at the breeder she showed them very quickly, how fresh they can be to her and she observ them very carrefully at the photoshooting too.
Bhoomi and Bonri have been showed in Brno and in the relative plentifull competition they get from the judge Mrs. Alena Košťálová in their class the victory. So Bhoomi get her fisrt CAJC!

At 5. 11. 2006 did us Bhoomi a great pleasure! On International Dog Show in Nitra (Slovakia) she won all that she was able to won. First her class with Very perspective 1 from Mrs. Libuše Ubrová (CZ) and then in the final Mr. Miroslav Guniš (SK) choosed her for the first place!!! Best In Show Female Puppy became Bhoomi Lamleh Schambala! We enjoyed it for the first time and we wish this pleasure to everyone! It ist fantastic! Here the video cut from Bhoomi's victory in Nitra.

14. 3. 2006 Our dear Arien won her last title. We report sorrow but with pride, that JCh. Arien Lamleh Schambala was in Slovakia TOP TIBETAN TERRIER 2005

1. 4. 2004 - our story beginns. Arien Lamleh Schambala was born as the seventh from eight puppies.

we use and recommend